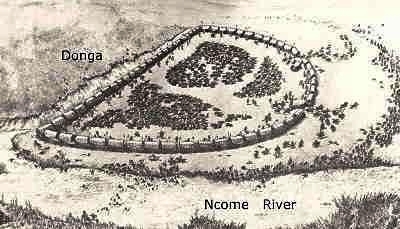 Anyone who has done even a little reading about the British Army’s tank corps during the Second World War will be aware that, while awaiting action or further direction armoured vehicles were often drawn up in a defensive circle called a laager.

South Africans well-read in the literature of the Anglo-Boer conflict, will easily  recognize in ‘laager’ a Dutch/Afrikaans loan-word, like ‘commando’ which has found a place in modern martial vocabulary.   Investigating further, it becomes clear that in discussion of tanks in the German and US forces, the word laager or ‘lager’ is used there also, so perhaps it was a general term in the days of Rommel and Montgomery . What is not immediately revealed, however, is that the concept of the wagon circle has a history which stretches back much further than the late 19th century .

When British troops first came to South Africa at the end of the 18th century, during the Napoleonic wars, they learned that the frontier Boers used the laager in both offensive and defensive capacities.  It was ideally suited to colonial warfare. It provided the mounted infantry of the Boer commando with a secure base on which they could fall back when outnumbered.  But when the tide of battle turned, they could sally from its protection and hasten the enemy retreat.  Developed and perfected in a thousand frontier confrontations, the laager proved its worth in the Great Trek, when disgruntled Boers left the Cape colony to start a new life in the interior.  This development is mirrored by the wagon-circle used for protection in North America by settlers crossing the plains in the face of resistance from First Nation warriors whose ancestors had hunted there without interference.

In South Africa, the laager proved its worth at Vegkop, near Winburg in the present Free State in the year 1836, where thirty-five men, supported by their women and children who loaded muskets and even moulded fresh ammunition, held out against a Matabele force sent to drive them from Mzilikazi’s territory.  More than forty years later, Paul Kruger, who as a boy of eleven had been involved in that battle, advised Britain’s Lord Chelmsford on his impending campaign in Zululand.  The Boer president urged the general always to laager his wagons; advice Chelmsford famously discounted, neglected or just plain forgot, so that his troops suffered a signal defeat at Isandlwana in January, 1879.

The high point in the story of the laager, however,  had come a generation earlier at the battle of Blood River, in 1838, when a large Boer commando, accompanied by sixty-four wagons, laagered on the bank of the Income river on a site never in later years satisfactorily identified, and defeated the Zulu army, precipitating the fall of Dingane. The laager became the cherished symbol of Boer tenacity and independence, immortalised first in the Voortrekker Monument, dedicated in 1949, and later in a ring of bronze wagons at Blood River, erected in 1971.  It was very easy, in this atmosphere of national pride, to be persuaded that the laager was a peculiarly Afrikaner invention, developed to ensure national survival at the tip of a hostile Africa.  But the reality is that this defensive wall of wagons goes back much further than the Dutch settlement in South Africa.

That inimitable historian’s historian, Barbara Tuchman, in her history of the 14th century, A Distant Mirror, refers (p. 591) to “a new military tactic” used by the Czech armies in the Hussite wars.  They created a ‘moving fort’ made up of baggage wagons chained together for defence against cavalry charges.   Exploring this topic leads to the conclusion that, while the Hussites may have begun by chaining baggage wagons together, before long they were using specially constructed ‘war-wagons’ to support their fight against the professional soldiery of the Holy Roman Emperor, intent on destroying them because of their “protestant” religion fifty years before Martin Luther arrived on the world stage.  The website: http://www.allempires.com provides a racy if creatively typed account of the war-wagons in action.  It reveals that these heavy wooden ‘tabors’ had hinged wooden sides with loopholes through which crossbowmen and hand-gunners could fire.  Rock-filled ballast wagons were used to strengthen weak areas of the defensive wall. At http://www.myweb.tiscali.co.uk one finds information about Jan Miska, the one-eyed Hussite general who so effectively deployed the war-wagon, while Wikipedia at “War wagon” provides information on and illustrations of a modern reconstruction of the tabor.

THE BATTLE OF ADRIANOPLE

The Holy Roman Emperor Sigismund was not, however, the first European military commander to encounter the use of  wagons in battle.  That honour falls to an East Roman Emperor, Valens who, faced with an invasion of Goths, sought to stop the barbarians near Adrianople in 367 A.D.  Hoping to bolster his military reputation, Valens decided to attack the enemy without waiting for support from the west.  The Goths, under Fritigern, had formed up on a hillside, in front of a defensive circle of their wagons.  Valens engaged the enemy immediately but was later trapped by the arrival of the barbarian cavalry and fell on the field.  The incident was recorded by the Roman military historian, Ammianus Marcellinus in his magnum opus on Roman history during the reigns of five emperors from Constantius to Valens.

It may be that a western reader, contemplating what has gone before, will have his Occidental prejudices confirmed and reach a typically Eurocentric conclusion about the ingenuity which led to this use of the wagon as an instrument of war.  But that would be misleading.  There is evidence that in China, for a period of some two thousand years, the ‘battle wagon’ was regularly deployed. Ironically, it is easiest to learn about this detail in Chinese history from sites that promote war games!

The Book of Han, a Chinese source from early in the 2ndcentury B.C., is reported to tell of the use by General Wei Qing of armoured wagons in ring formation against enemy cavalry. Over a thousand years later, in the 15th century A.D., a general of the Ming Empire, Chi-Kuang, used large two-wheeled carts drawn by mules.  Instead of regular sides, these carts had hinged wooden screens which could be dropped to allow entrance or exit of soldiers in conflict with Mongol horsemen.  Each cart carried two pieces of light artillery and muskets and was served by ten men whose task it was to manoeuvre the cart, while four musketeers provided firepower and another six wielded swords and lances. In battle, these soldiers were not permitted to advance more than eight metres away from the security provided by their cart.

So, much as some readers may like to believe to the contrary, the laager was not a South African invention.

What this short study has revealed, however, is that human beings the world over, facing similar problems with like resources, tend to devise solutions that also have much in common.  There is nothing new, as millennia ago the Wise Man observed, under the sun.