By 486 the Western Roman Empire had been reduced to four provinces in northern Gaul: Lugdunensis II, Lugdunenis III, Lugdunensis IV Senona and Belgica II. These were governed by Afranius Syagrius, senator, whose father Aegidius had been supreme commander of the imperial army in Gaul.

To the north in Belgium the young chief of the Salian Franks of Tournai, Clovis, had formed a confederation of all the Frankish tribes on the west of the Rhine with the purpose of defeating Syagrius and conquering Roman Gaul. The two armies met near Soissons to decide the fate of western Europe. Let the thumpery begin! 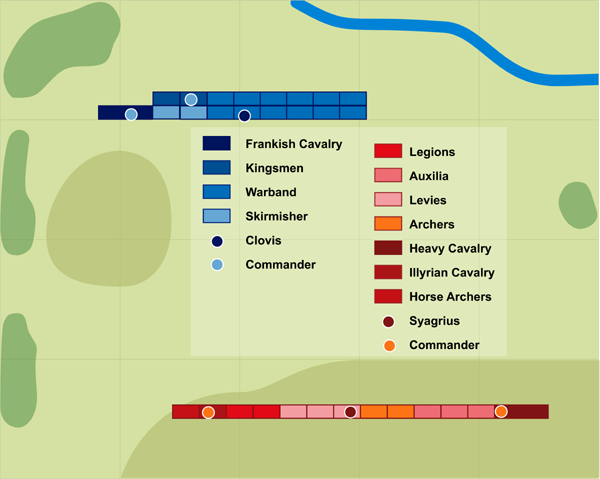 The Frankish plan was to outflank the Roman left, defended by light cavalry. The Roman plan was to let the Franks come and get them, and possibly try an outflanking move from their right flank using their heavy cavalry.

The Franks did not waste time with their advance…. 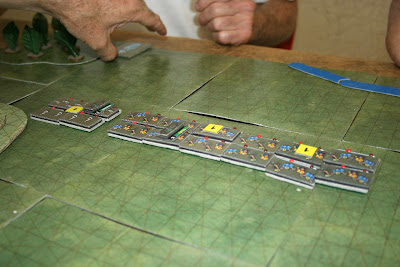 …and the Roman left was soon in trouble. The Roman horse archers gave way before the Frankish threat. 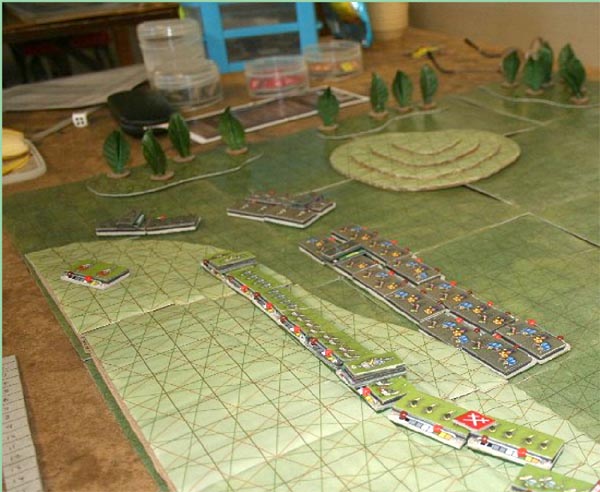 The Frankish left, however, was in mid air. The Roman archers were able to wheel left and riddle the Frankish warriors with arrow fire. Meanwhile the Roman heavy cavalry wheeled toward the Franks’ flank and rear, followed by the Auxilia. Chaaarge! The Frankish foot closed with their foes. On the Roman left things began to look grim: the Illyrian cavalry retreated before the closing hordes of Warriors and Kingsmen. The Roman horse archers were destroyed by a well-time charge from the Frankish cavalry, and the legions were now exposed to attacks from the flank and rear.

Things, however, were looking just as grim for the Franks on their own left flank. Warriors began to go down before the combined assault of Roman archers, levies and heavy cavalry. The kingsmen were hastily detached from the opposite flank to go and shore up the crumbling line… 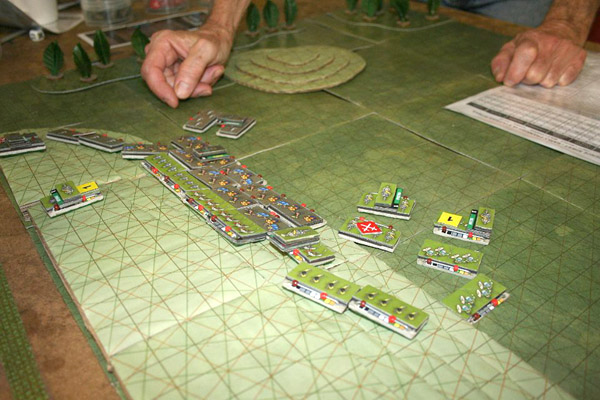 …but too late. The critical point was reached. In Optio a base, when it routs, applies a panic hit to neighbouring friendly bases, dropping their morale. To this panic hit is added the panic hits of already routed bases. Panic hits accumulate, until the critical point is reached when the rout of one base causes the neighbouring bases to rout, which rout their neighbours, and so on. The Frankish warriors finally decided they had had enough, and routed like dominoes. Game over! 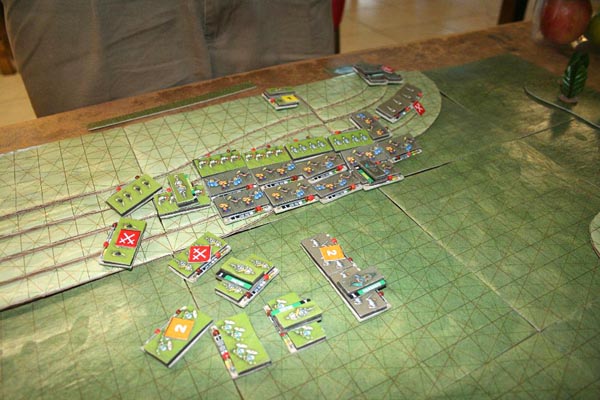 Many thanks Tom, Arthur and Delia for an enjoyable game. In retrospect the Romans did have a significant advantage defending a slope (for example, the Franks, normally superior in the charge, had their bonus nullified by the slope). We must try this or a similar scenario again on the level plain and see how the last army of Rome copes when the terrain is not in their favour.